Like studying a book, Madeleine takes every opportunity to observe Devon all while searching for some new and exciting literature in the science fiction section of the school library.

“Hmmm…” Madeleine thought to herself. “He’s a cool jock who’s hiding out in the library, and he even seems nice…What’s he’s story?”

“Found something?” Devon interrupts Madeleine whom he notices clenching a book and gazing in his direction.

“What?…Huh?” Madeleine looks down at the book in her hand. “Um, well it’s…a consideration” She finally manages to say with slight embarrassment.

“Which one is that?” Devon asks as he jumps to his feet and saunters toward Madeleine. He puts his hand out, gesturing for her to pass the book over.

Madeleine awkwardly releases the book she had casually selected. “Oh…ok. Sure.”

“Ah, this one is okay but if you like I can recommend a really good series?” Then he paused. “But it may be a bit heavy if you’re just getting into this stuff.”

“What is it?!” Madeleine asked excitedly. “I’m up for the challenge. I’m all for getting lost in books right now.” Her voice lowers, as though having a side conversation with herself “Clearly, I have no life!”

“What’s that?” Devon looks at Madeleine with a puzzled expression.

Madeleine focuses on Devon again. Her eyes light up. “So what’s this book series?”

Devon laughs softly. “Are you sure you’re ready?” He asks.

“I was born ready!” Madeleine responds with a tone she perceives as a “tough guy” from the movies.

Devon laughs out loud. Madeleine joins in with him until they are hushed by other library patrons.

They look at each other and continue giggling softly

“Let’s get out of here!” Devon eventually says, in a whisper.

“You didn’t think ‘the best book series’ ever would be in this excuse for a library did you?” Devon interjected immediately.

Devon drops his books and the pair leave the library, just as the end-of-school bell rings, almost in a jog. 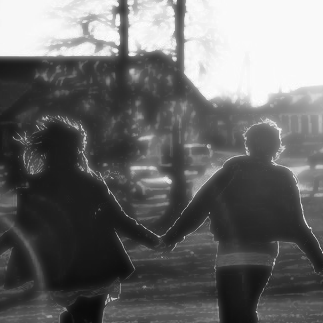