This week  I am  excited, and  proud, to introduce you to Aimee Schlectman.  Who is  Aimee Schlectman, you asks? She is a self-driven, highly talented, quite interesting, and loads of fun to work with, kind of Gal. I worked with Aimee on the acclaimed “City of Lost Souls” crime drama. I observed as she meticulously combed over each scene in the script, cataloged each item needed to dress the film’s characters, and the indoor, and outdoor sets alike, into her huge binder.

You see Aimee was our Wardrobe and Props expert. Beyond the glamour of the lights, camera and accomplished actors, there is a person (or team) who feverishly works to pull the minute details together. Aimee led her eager team, to do just that.

Stick around to learn more about this unique movie professional…

Hello there Aimee, you have a very important role in the film industry. How do you precisely describe what you do?

I do Wardrobe/ Prop Styling for film & TV.  I interpret scripts and convey the words into the actor’s wardrobe. I assist bringing the Directors/ Writers vision to life through wardrobe.  After I break down a script, I visualize the characters wardrobe from jewelry to the handbag/brief case they carry.  From the smallest detail of name initial necklace to an Over the Top Gold Encrusted Diamond Jesus Pendant a Pimp would wear. It  becomes an extension of the characters’ persona.

Within the last 5 years, I have added Prop styling to my repertoire.  Prop styling allows me another opportunity to design scenes that are more realistic and believable.  Not only do Props assist the actors into character it is extremely creative.  From; faux ice cubes to watered down coffee (used as scotch), duffel bags filled with Cocaine and briefcases stuffed with faux Money. It is the art of making it look credible and genuine.

How long have you been fitting actors for costumes, and dressing film sets?

The film industry is my Second career.

I studied Fashion Design in college and have a Degree in it. I worked in the fashion industry after college in NY/LA. After realizing, it was not as creative as I thought it would be-I switched gears and entered corporate America. After many years of Grey business suits and smart practical shoes, I realized I was not fulfilling my creative dreams.  I began classes at FIT (In NYC). After a few classes at FIT, I landed an intern position on an indie feature film with some named talent. It was not a glamorous position. –I kept fire watch on the back of the Wardrobe truck in the middle of summer and ran errands for The Costume Designer. I saw and experienced a lot, got my first taste of movie magic – I was hooked.

Why do you love doing what you do?

This industry is not for the faint of heart. The days are long; they start early and end late. I love doing this job – I remind myself especially on days when the alarm is set for 4:00 a.m. A day on set always trumps a a day in the office.

I love being a wardrobe/prop stylist. Its SUPER artistic, I get to hang out with other misfits like myself and get opportunities to work with talented accomplished folks… No one does this job for the glamour or Money. You do it because you love making movies

Ain’t that the truth! Please describe the type of projects, you have worked on.

What has been your most memorable or favorite project thus far?

My favorite project was an 80’s period Feature Film. It was based on a female DJ starting her career out in NYC in the early 80”s. I had a crew of 3 and we did tons of extensive thrift store shopping/hunting ,borrowing from up and coming designers and creating custom made logo T-shirts.  We had a small budget and that added to the creativity. Unfortunately, shooting stopped mid-shoot because the Producer embezzled the funds, BUT the Wardrobe was amazing.

What are you working on right now? What great creations are you pulling together for the project?

Currently I am in talks with a couple different Directors about my next project… I just finished some commercial work. It was an ad for Washington Gas.  I was privileged to work on their new rebranding ad campaign. If you ride the metro, keep an eye out for the posters!

Nice! I will be sure to do that Aimee! Where does your motivation to do what you do come from?

I remind myself that I am doing exactly what I want, and love to be doing… Lawyers do not get that excited telling you about their latest case -do they?

Do you have a film whose costuming, and/or set design was particularly impressive to you?

“Casino”, “American Hustle”, the “Wrestler”, the “Sopranos”. I love the opulence and the tackiness!

Do you have a favorite film among this year’s Oscar nominated films?

“American Sniper” and “Whiplash” are my two favorites

Why are those your favorite?

I loved “American Sniper” for its superbly subtle critique, made by Mr. Eastwood. I admire our brave soldiers so much and this film salutes the honest work of all soldiers. It is also an interesting twist to see what happens to these brave men and woman when they return home.

What are your thoughts on the local independent film industry? Do you believe that it is growing…thriving?

I do not think there is enough local independent work for the DC/MD area. I know Richmond gets a fair amount, but I do not want to travel 2 hours (from Bethesda) to a film set. I wish they would shoot more local shows here. We have “VEEP” and “House of Cards” but something right here in DC would be fantastic. Perhaps “Law and Order” – DC Style. That would be awesome! Do you think Dick Wolf is reading this?

I sure hope he is! If you could adjust the independent film industry in the DMV area, so that it is a well-oiled machine, where would you make those adjustments?

My suggestions would be; to shoot more movies here and use local crew. We need the work and we are very talented.

We are indeed! What advice would you give to someone who has a desire to break into the movie business with similar gifting to your own?

It takes a long time to get a steady amount of work. You need a second job or live at home. The money ensues but not for a while. If you do not love the craft or do not love being on a film set (they are not all indoors and warm) this is not the industry for you!

Please describe yourself in three words?

Energetic, Professional and Creative. (Does not have to be in that order)

How can we keep abreast of all the fabulous work you are doing?

Most of my work is on IMDB…Just check me out HERE!

Aimee as usual, you have been a blast! Any final words?

Thank you for the interview… My final last words… Stop having the Hair and Make-up crew do WARDROBE!

Loud, and clear Aimee, we – and filmmakers everywhere – hear you loud and clear.

Thanks so much for taking the time to share your experiences with us. We have learned a great deal. It only gets better from here. Onward, and Upwards. Cheers!

Well there you have it. – Another engaging story from a local talent in the film industry. Thanks for checking in, and be sure to return next Wednesday for another “Local Independent Film Spotlight”!

Aimee Schlectman “Dressing” a Scene of “City of Lost Souls” 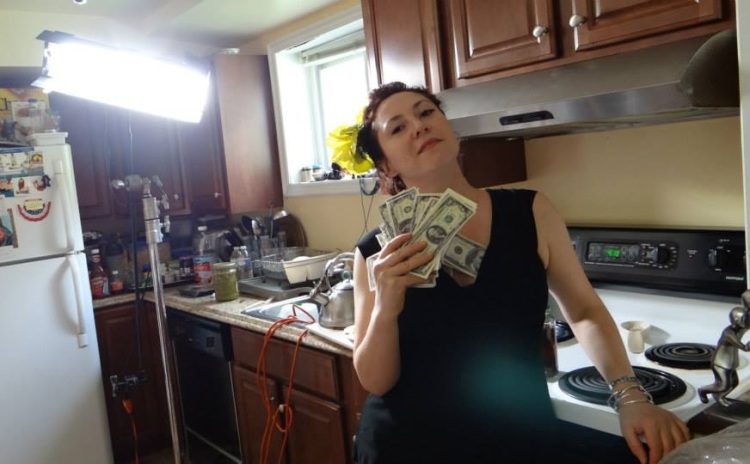 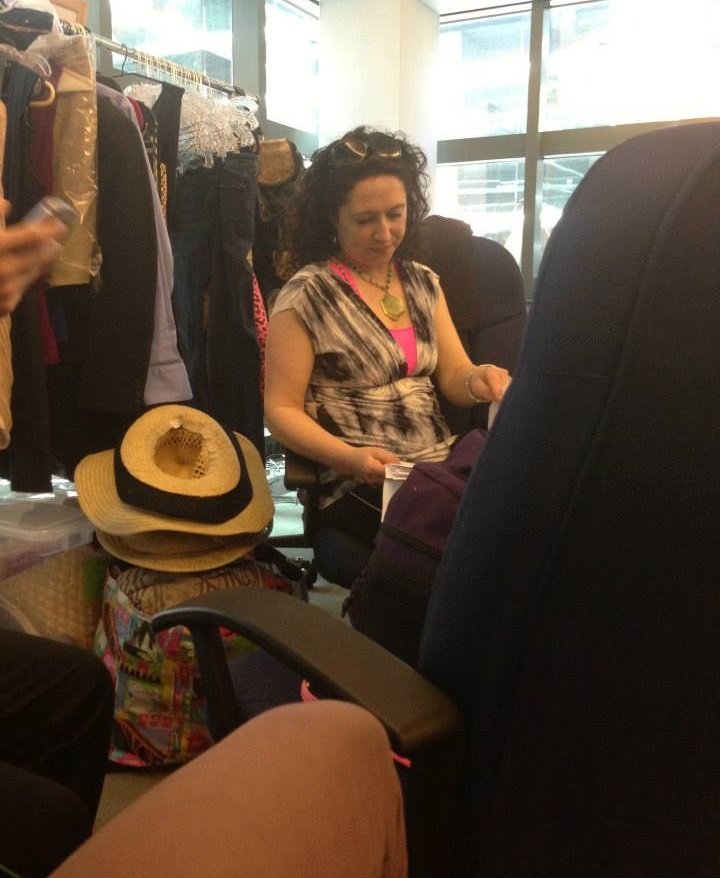